0
NUANCES OF NO Hanne Lippard 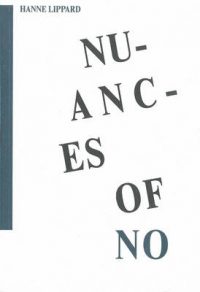 NUANCES OF NO Hanne Lippard

It is with great pleasure for BDP to announce the publication of Hanne Lippard’s Nuances of No, the first comprehensive collection of the artist’s text work. Over the last number of years Lippard has built up an impressive and equally idiosyncratic practice based at the meeting point of words, performance and visual art.

When composing her texts Lippard relies on the sounds that they trigger in her mind when she is writing but crucially also when she is speaking. The use of her voice has gained for her a typographical insistence, becoming her main medium of expression whether it be through the linearity of a mechanical narrator or through the use of her voice as a more personified melodic rhythm during her compelling live performances.

Her affinity with common speech ensures that hers is nothing less than a poetry that all of us can recognize. Common sayings, turns of phrase, everyday chitchat become for her a repeated chorus rather than a coherent meaningful construction of words: with Lippard they become melodies in themselves.

Aphorisms, love-songs, voicemails, quotes and slogans lose or gain value depending on how they are re-arranged and performed – in Nuances of No Lippard reclaims language for her own end to try and overcome any overruling claim to authorship. At times graphic, playful and intimate, this is an artist using language in all its forms in an effort to create an original aesthetic of the word.

Lippard has been most recently shortlisted for the inaugural Berlin Art Prize.