0
HOW A MOSQUITO OPERATES Mahony 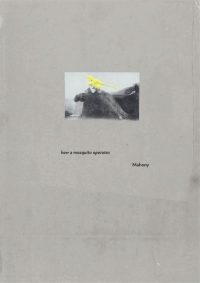 HOW A MOSQUITO OPERATES Mahony

Much of Mahony´s artistic production derives from well known and unknown historical facts. This kind of appropriation in Mahonyterms always means questioning, transforming, translating, re-associating and reactivating the chosen topic. With this process they form new rhizomatic nets making connections from past to present, paths that go across geographical and historical zones, social and political contexts. They alienate the viewer by translating found material from ancient times into ours or from one culture into another. At the beginning of a project oftentimes stands a journey to places like Yucatan (2011), Ushuaia (2009) and Brasil (by cargoship, 2009). Therefore works that emerge in public space or in the countryside are later continued in the studio and vice versa.

«I went walking in a slow season. Metaphorically speaking. Slow season is late summer for me, the time of low sunlight and glowing evenings. One such evening of autumn dusk I went to the artists’ studio and sat and talked a while. Nothing really happened, the talk desultory, amiable. Off the point. During the course of the chat I was reminded of the story of a soldier on his way home by the most circuitous of routes. Later as I left the studio and walked down a stairwell this story suddenly broke up into events spread across time and space, an interrupted itinerary of an episodic trip. I saw sunlight sink lower over a steamboat on the Amazon. A memory of a market hall in Spain from when I was homeless and not in love. Coffins draped in flags being ushered into a plane out in an overcast desert. Rumours written and distorted by blind poets. I wondered about the possibility of chance in all these thoughts passing through my mind: the repetition of events over time and space culminating in a friendly chat in the artists’ studio one evening. Or rather one story rendered in multiple images, objects, events in the long return home of a tired old man. The challenge I had as I stepped out of the stairs into the evening light was to find an order to it all, not only to remember a conversation but to start a new one, to start many new conversations.» – from the text by John Holten

The Irish writer, artist and publisher, John Holten (b.1984) studied at University College Dublin and the Sorbonne-Paris IV before obtaining an MPhil from Trinity College Dublin. His novel The Readymades was published in 2011, and most recently he has written fictional or immersive texts for the artists Mahony, Natalie Czech, Darri Lorenzen, Jani Ruscica, Lorenzo Sandoval and The LGB Group. His work has been included at Center, Berlin, Malmö Konsthall, The White Building London, David Zwirner Gallery New York (with Aengus Woods) and NGBK Berlin, amongst other places. In 2011 he received a Literature Bursary from the Irish Arts Council. His video commercials for his next novel Oslo, Norway have been exhibited in Plan B Gallery and Team Titanic, Berlin and an extract appeared in the first issue of the journal Gorse in spring 2014. www.johnholten.com

Graduated in French Literature and Art History, Sophie Kaplan is an Art Historian and Curator. She used to work at l’École nationale supérieure des beaux-arts of Paris between 1999 and 2007, while curating some personal exhibitions projects in Germany and England. Between 2007 and 2012, she was director of CRAC Alsace – Rhineland Centre for contemporary art , and has also been invited as guest teacher at La haute École des arts du Rhin, in Strasburg. Since September 2012, she heads La Criée, Centre for contemporary art in Rennes, where she is developing a programme that crosses visual arts and others fields of contemporary creation (literature, theater, dance, etc.), production works and research programmes, local and international projects.